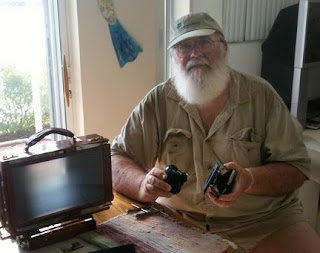 Clyde with his 6×10 view camera
In 1996, when Ron Wisner was still building large
format cameras, I asked him to build me a 6×10
back that would adapt to his 4×5 view camera. He
accomplished the request, and then found that others
liked that proportion too, so he build a few more.
There aren’t many out there…if you own one it would
be great to hear from you.
I love the proportion of 6×10 and also the fact that
the camera would be much lighter to carry. My
8×10 Deardorf, without lens, weighs 16 pounds.
The 6×10 Wisner, without lens, weighs 7 1/2 pounds.
Plus, I can carry it in my backpack open with my
wide-angle 120mm Nikor already on it. This means
my set up time is reduced considerably.
Because I mostly use wide-angle lenses I had to
take a couple of inches off the back standard of
the 4×5 Wisner before the camera would work for me.
My first photographic use of the camera was in 1997
when I was Artist in Resident at Rocky Mountain
National Park. I was excited about the images…
except for one thing. The film holders leaked.
(Thank heavens I had taken more than one camera
with me on that trip!) When I inquired as to when
the film holders could be corrected, I found
out the company who made the holders
was no longer creating them.
So, for the past 14 years the camera has sat on my
shelf patiently waiting for me, until I me Richard
Ritter who builds and repairs large format
cameras – www.lg4mat.net – in Vermont. Richard
told me about Alan Brubaker who builds large
format mat camera equipment including film
holders – www.filmholders.com – in California. 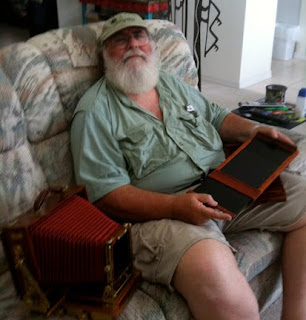 Last week I received the film holders. It felt
like Christmas! I am, once again,
excited about using my “new”
6×10 view camera! The film holders are
beautiful…a piece of art.
I will be leaving for California in a few days for
my 50th High School Reunion, the opening
at the Annenberg Space for Photography, and
a couple of weeks in Yosemite. Taking the
6×10. Will let you know how it goes…