Skip to content
The journey…and often battle…under way to
restore the Everglades has seen one of its
first victories. This was a historic moment
and we were very proud to be there to see
a positive move forward in the restoration
of the Everglades ecosystem.
Based on the Comprehensive Everglades Restoration
Plan (CERP), the US Army Corp of Engineers and
South Florida Water Management are leading in the
Picayune Strand Restoration Project. The first project
to save the Everglades under the CERP plan that is under
construction.
The project area includes 55,000 acres of native Florida
wetlands and uplands that had previously been purchased
for development. Eighty-three miles of canals and 227 miles of
roads were constructed to create a development that coined
the words “swamp land for sale in Florida”. The land was
sold during the dry season, but was under water in the wet
season. The cost of correcting that problem was beyond
the developers finances and he went bankrupt, leaving the
environment destroyed.
Restoring the Picayune Strand entails plugging 83 miles
of canals, building and operating pump stations to allow
water managers to direct fresh water to drained wetlands,
as well as to protect land outside the project area. They
will be removing 227 miles of crumbling roads and
take on the destruction of non-native vegetation.
Besides restoring fresh water to wetlands, the Picayune
project will improve estuarine water quality by increasing
groundwater recharge and reducing large and unnatural
freshwater flows.
To live to see this section of the Everglades ecosystem
returned to it’s original wilderness gives us hope that
other wilderness areas can also be saved.
Never give up hope…
It was an inspirational day!
While we waiting for the bus to pick us
up and take us to the site, Clyde, Pamela
Mac’Kie and Bill Hammond get into
a discussion. Bill is a fountain of wisdom
regarding Florida’s environment!
Bill Hammond, Clyde and
Mike Owen finding a place
to sit in the sun.
It was a cold day…as you can
tell with everyone wearing
heavy jackets! 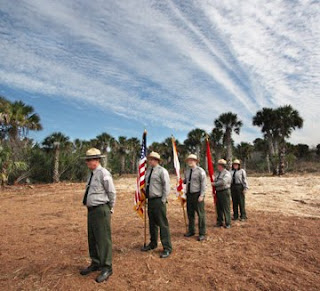 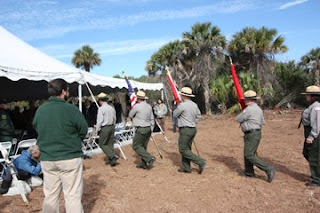 The Pledge of Allegiance was led by the
children in Calusa Park Elementary School
They also concluded the event with two
wonderful environmental songs.

Colonel Alfred A Pantano, Jr – District
Commander of the US Army Corp
of Engineers began the ceremony.
He is a great speaker…humorous, serious,
and moving. He introduced the VIPs and
then each of them gave a speech.
Senator Bill Nelson said it so well when he
spoke of his time as an astronaut and
seeing the earth…”this tiny speck of blue
brilliance“… suspended in space, then finding
his home, Florida, and realizing how
precious Florida and this planet is.
Others joined in with the same overall
comments…about how important it is
to “re-wild” Picayune…about how
restoration means jobs, as well as
saving the environment…about the history
of this moment and when, not long ago,
Picayune had been drained and paved –
who would have thought we could ever
achieve the will and ability to bring it
back to its native wildness?
They were all wonderful and inspirational
speeches… 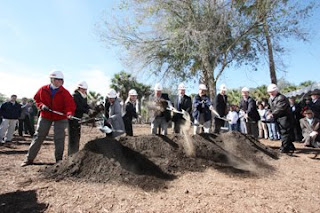 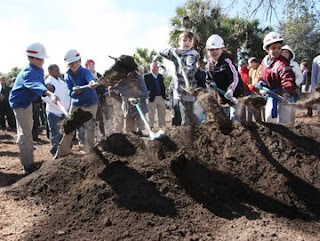 Because this project is for the future
generation, it only seemed natural
that the children of Calusa Park
Elementary School also got to
shovel some dirt as a symbol of their
involvement in this project.
I’m not sure who had more fun throwing
the dirt around…the adult or kids! 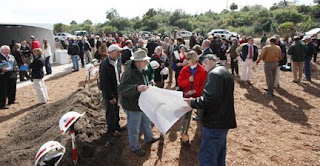 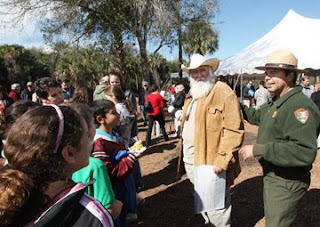 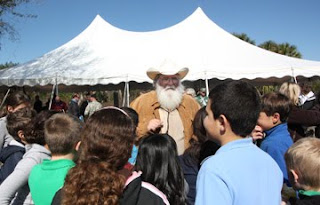 Clyde talking with the children from
Calusa Park Elementary School
After it was over, it seemed that every time
we turned around interesting discussions
were taking place…fun fun!
Discussions with
Colonel Alfred A. Pantano, Jr – District Commander
Corp of Engineers Jacksonville
Bill Hammond, Clyde and LTC Michael
K. Kinard – Deputy District Commander 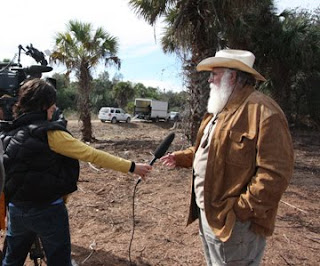 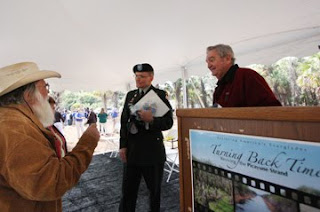 …and then more discussion…
It is always uplifting to see projects that have
been hard won come together. It is inspiring
and gives us courage to continue the battle
to save the Everglades ecosystem.