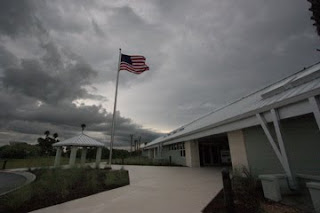 We all gathered on a rainy afternoon in September
at the new Welcome Center for Big Cypress Swamp.
The center will not be open to the general public
until sometime in Feb 2011.

L-R
Franklin Adams, told stories about efforts to save Big Cypress
Clyde Butcher, the host of the film
Elam Stoltzfus, film maker
Peter Thomas, the extraordinary voice of the film
Sammy Tedder, the soothing music of the film

Clyde Butcher and Elam Stoltzfus met during the filming
of Visions of Florida for a Public Television program
in 1989. Their passion for the Florida environment
brought them together over the years as they
worked on projects educating the people of Florida
through both film and photography.
Clyde jokingly says, “I have known Elam
long enough that we have gone gray-haired together.” 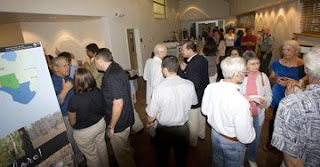 Big Cypress Swamp – The Western Everglades, is a
documentary film for the Welcome Center at Big Cypress
on Tamiami Trail (US 41), as well as a 57 minute film
airing on Public Television. The film is also available on
a DVD. The music is available on a CD.
Viewers of the film are treated to the rare and primeval
sights and sounds of swamp expeditions by foot, airboat,
swamp buggy and helicopter through the richly diverse
wilderness of subtropical flora and fauna found in
the Big Cypress Swamp. The film also tells the stories of the
tireless efforts to preserve and manage the Big Cypress region.

Elam Stoltzfus is a nationally acclaimed award winning
master cinematographer. When he learned he had
earned the bid to create the film for Big Cypress Swamp,
he asked Clyde to host the film. “Joining with Elam to
create a film about the Big Cypress was a dream
come true,” said Clyde. “I was glad it was Elam who
was creating this film. There are not many people who
are willing to brave the difficult swamps and cypress
strands in order to understand the beauty and peace
found in Big Cypress Swamp. Elam’s skill and our
common view of the environment made working with
him a pleasure.”
L-R
Sammy & Sandy Tedder, composer
Rick Cruz & Lisa
Clyde Butcher
Elam Stoltzfus, film maker
Peter Thomas, the extraordinary
voice of the film
Pedro Ramos, Superintendent of Big Cypress 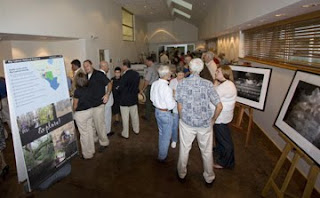 For two years Elam and his crew lugged the heavy
equipment required to make the film through the
swamps, cypress strands, and sawgrass prairies
of the Big Cypress Swamp. “My journey through
Big Cypress always seemed like a gift to me,” Elam
commented. “Ever day nature provides its gifts in
sunrises, animal behaviors, changing weather patterns,
landscapes and sunsets. This is our gift back. We
hope that the viewer will experience and enjoy a small
taste of the beauty and fragility of the deep swamps
of South Florida as they view
Big Cypress Swamp-The Western Everglades.” 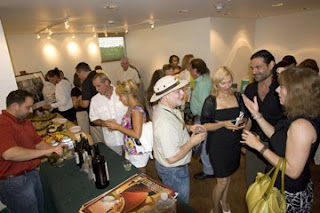 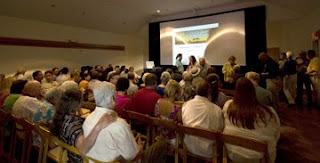 There was a full house to see the film.

Superintendent Pedro Ramos of Big Cypress
National Preserve introduced the film and all
of the people who helped make it possible. 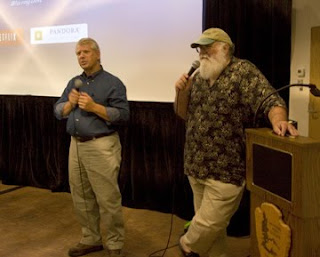 Before the film started Elam and Clyde gave a
short power point about the making of the film,
then took a few questions from the audience. 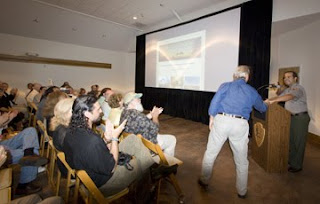 After the film was over Superintendent
Pedro Ramos gave a warm handshake
of thanks to Elam for making such a great film. 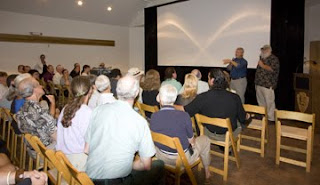 After the film was over, Elam and Clyde answered
questions from the audience. 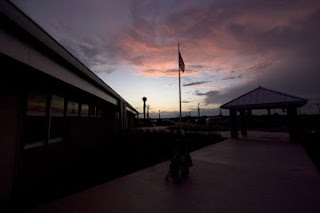 The evening ended with a wonderful sunset
and a feeling of satisfaction that the film will
inspire the public, and also educate.

Quotes from people who have viewed the film
on Public Television

From the grand landscapes to the smallest insect or
drop of dew, Stoltzfus brings us into the Big Cypress
Swamp – it’s like being there. Stephen Wood PhD,
Professor of Communication and Film Studies,
University of Rhode Island

I was moved by what I saw and heard, my ideas about
the extent to which Nature is under siege, were
altered forever. J. David Pincus, PhD Professor, Walton
College of Business, University of Arkansas

…it was indeed an incredible film. The message was
conveyed through not just facts/interviews, but also
beauty and humor, and that really struck a chord with
me. Aesthetically, I was impressed again and again with
nature for having such beauty and with you for having
such talent in capturing it. I loved the shots, but was
especially taken by the audio track and the sound
mixing…all the notes hit just right. I turned out all
the lights while watching and just focused on it. The
film wasn’t just educational and inspiring, it was also
very soothing. Bravo, Mr. Stoltzfus! 🙂 Tabinda Syed,
Media Student at Florida State University

A visual lyrical tribute to the Big Cypress Swamp…vivid
portraits of some of the giants who put their lives on
the line to save it from being paved over. Chris Palmer,
Professor and Film Producer, American University,
Washington D.C.

One thought on “Premier of film: Big Cypress Swamp – The Western Everglades”