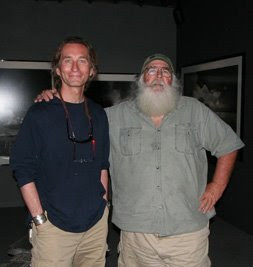 When we were out west photographing for Clyde’s exhibit
America the Beautiful we bumped into Steve. He once
worked in Florida and now was working in the Tetons. Steve
gave us all kinds of locations to scout and was a wonderful
friend to us while we were there. Steve told us about a gallery
in town (Jackson Hole) we might enjoy seeing. It was David’s gallery.

It is rare to meet a photographer who owns his own
gallery, understands the business of a gallery, yet is still an artist.
It was very refreshing discussing both the reality of business and
the ‘other worldly’ vision of art. Getting to know David was great
and we were glad to see him again while he visited Florida.

David and Clyde in our gallery 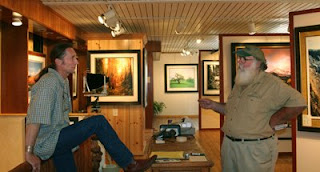 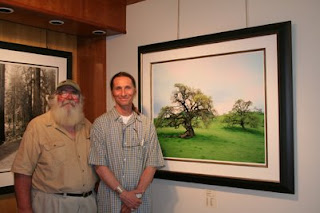 Clyde & David at his gallery

While visiting with David at the Tetons he told us about one
of his favorite locations in the Tetons and suggested we
try it. The next morning Clyde and I got up at 3:30am
and headed out to the site. It was a great location!

The moon was a full moon, but that first morning was too early to
catch the moon over the mountains because by the time the sun
came up and the moon reached the mountains, the intensity of the sun
would block out the moon. Clyde decided the next morning would
be better. We were so excited about this opportunity to catch a
full moon over the Tetons that we had to share it with Steve, Ducky,
and David. We called them all and agreed to meet the next morning
at the pond for a moon shot. 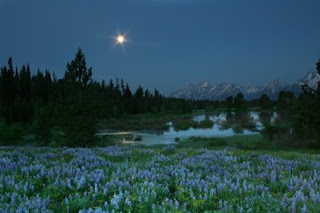 I took this image on the first morning. As you can see the
moon is very high and there is absolutely no light…thus the
image is flat. It’s still a neat image in color, but in b&w
the flatness just won’t work. Clyde needed sun light and
he needed the moon closer to the mountains for a good
composition. 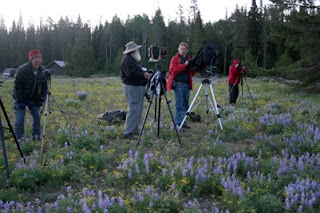 Ducky, David and Steve setting up their cameras

The next morning we all got to the location at about the same time.
I thought we were early and was surprised that everyone was
already there!

David said the west had been so dry for so long that this was the
first time in ten years that there was water in this pond.
With the pond as part of the foreground, it gives a wonderful sense
of life to the scene.
It was fun watching all of the photographers. They were all waiting for
that ‘Aspen Glow’… that warm early morning light to hit the Tetons,
and then the cameras began to click. They continued photographing until
the light was too harsh and bright for color photography.

The fun thing was that Clyde and I could watch while they fulfilled their
photographic vision because Clyde wasn’t ready to photograph until the
light was harsh and bright…and fortunately, the moon was also closer to
the mountains by that time. With the sun fully on the mountains, their
shape, shadows and texture is revealed. It works in black and white, but
in color it doesn’t. Interesting…

The following photographs…mine, David’s and Clyde’s…
are fun to compare. I wish I had Steve and Ducky’s images
to put up too. It is so amazing that the three of us stood in
pretty much the same spot and we all came up with
a photograph that is different! 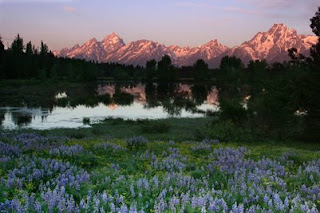 My photograph of the early morning ‘Aspen Glow’ . 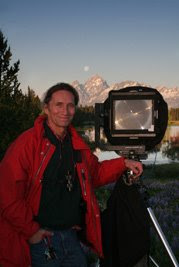 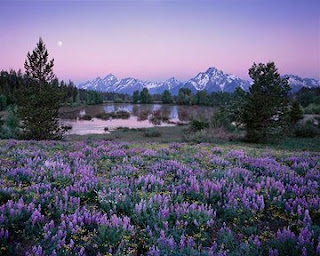 David’s moon over Tetons
for more of Davids images check out his website:
www.davidbrookover.com 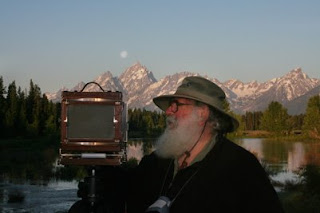 Clyde photographing moon over the Tetons. 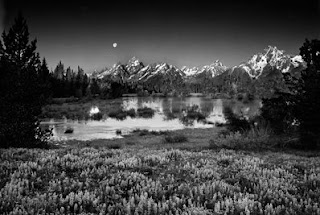 Clyde’s Moon Over The Tetons
for more of Clyde’s images check out his website:
www.clydebutcher.com 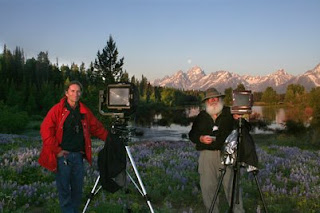 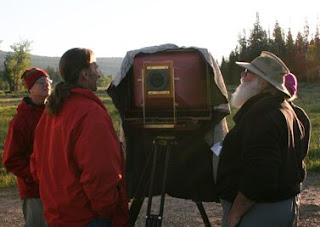 When a group of photographers get together there is always a LOT of
technical talk and sharing of equipment and ideas for better equipment.
When Clyde talked about his 12×20 view camera everyone wanted to
see it, so he pulled it out and set it up. 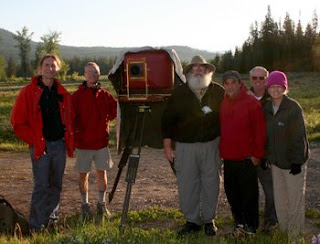 The experience and sharing attitude of David was one of the highlights
of our trip out to the Tetons, so it was a joy to see him again while
he visited Florida. 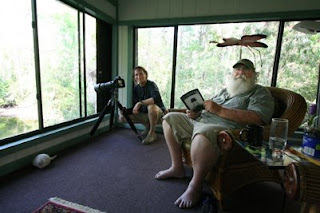 David & Clyde relaxing on our porch over looking the pond…
and taking advantage of some easy bird photography from our porch!
It was great seeing David again. Wish we had been able to spend
another day together to go on a photo trip together…maybe next time!