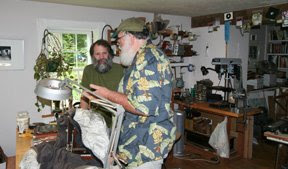 We had taken the 12×20 view camera out west for Clyde’s America the Beautiful project. That camera weighs 40 pounds…and that does NOT include the weight of the lenses and the film! The lenses, film and tripod add another 80 pounds! We only used it four times, but believe me, that was HARD work.

Clyde had heard that Richard Ritter was building a light-weight 12×20 view camera that weighed 12 pounds! So, when we drove up to Vermont to give the Cone workshop, we stopped by Richard’s place to see his new 12×20 view camera.

Richard Ritter has an extensive history of working with wood and metal, and a keen interest for the arts. By trade he is a Tool & Dye Maker with a degree in Tool Design. Richard worked at Zone VI studios for 15 years. He was responsible for product design, testing and manufacturing the photographic equipment. He is also an accomplished large format photographer. If you would like more information about Richard and his cameras his website is: www.lg4mat.net 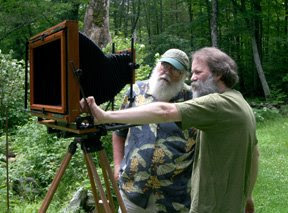 Clyde enjoyed talking “camera” with Richard and was very impressed by the craftsmanship of the camera. However, the more he thought about it, the more he decided that he would rather have a smaller camera…the age thing is becoming a factor in all we do, so you young photographers get out there and photograph while you can! Anyway, back to the point… 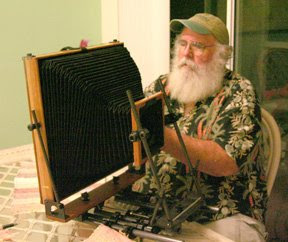 He received the 11×14 just in time for our trip to the Everglades National Park.

When he saw the wonderful composition of bromeliads while we were with Eric and Katy he decided he would go back and photograph them with a larger camera…the 11×14.

We waited for the right light and then hiked back out to the Cypress dome.

Of course there is nothing that is more fun than sharing a new photographic “toy” with another photographer. Eric and Katy took great interest and joy in seeing such a beautiful piece of equipment.

I loaded the film and lenses into my backpack and Clyde carried the camera and tripod. 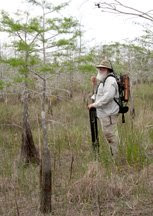 The bromeliads were still just a beautiful as they had been on the day that we entered the Cypress dome on the first trip . Clyde knew exactly where he wanted to be, so the set up was quick. Can’t wait to see the final image! 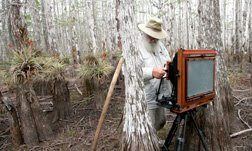