The time had finally come for Long Key to have the grand opening of their new nature center. We had no idea what the center would look like, or how Clyde’s mural was going to look, so we were excited to be a part of the event.

The building was absolutely beautiful! The image above is the back of the building. The boardwalk stretches across a restored pond and into the oak hammock. We didn’t have time to walk through the oak hammock, but are looking forward to taking the camera in there this summer.

We enjoyed all of the speeches and the pride of the community in their new building. After the ribbon cutting we visited with folks and finally found Tim Harrington in the crowd.

After awhile we went inside to see the educational displays. There were so many people it was hard to see everything, but I truly enjoyed the archeological displays and information. When Tim directed us to the mural we were very impressed with the presentation. They did a great job! 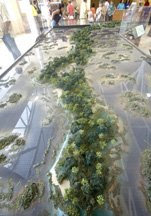 One very interesting display was a model of the way the Long Keys looked before the Everglades was drained. If you look at the image and realize that everywhere there is water is now houses it will give you some idea of the damage we humans have done to the one of a kind environment of the Everglades. Kind of sad, hmmmm?

It was great fun meeting so many people who were responsible for this great gift to the people of Broward County…but the icing on the cake waited for me as we left the event. As we drove out of the parking lot I saw in the distance an incredible sight of thousands of Ibis landing on a rookery. I have never seen anything like it. 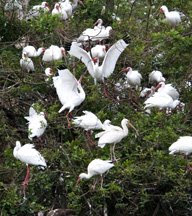 It was almost dark, but I was determined to photograph the rookery anyway. Clyde parked the car and I jumped out hoping I’d be able to capture at least one good image.

Watching all of the birds define their pecking order was a lot of fun, but there were so many of them that it was hard to find a composition. Then, the moment I did, they’d have a “pecking order problem” and they’d change places! 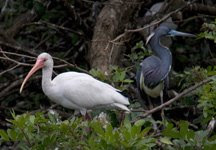 It was fun trying to capture an image. It finally started getting so dark that it was almost impossible to take pictures.

I could have stayed all night watching them…what a sight! And to think that this kind of thing use to be common in the environment of the Everglades…heaven! 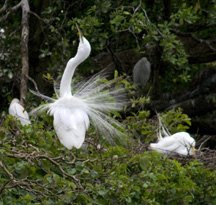