It seems that every time we walk the Anhinga Trail there are three Blue Herons who have their “spot”….which works out very nicely for photographers! The great thing about herons is that they stay very still for long lengths of time, which allows for very sharp photographs. Or, as in Clyde’s case, the ability to use a large format camera!

Clyde was determined to photograph one particular Blue Heron because the background of the herons domain made a nice composition. When we arrived at the spot the heron wasn’t there, however with great faith Clyde set up his camera and waited. While he waited I hiked around the trail to see what was happening with the other birds.

The first thing I saw were the misty images of photographers in the distant fog… couldn’t resist the photo! 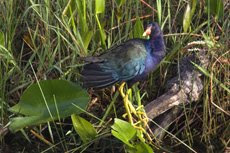 I watched as a Purple Gallinule took his morning bath and then preened his magnificent feathers in the morning sun. 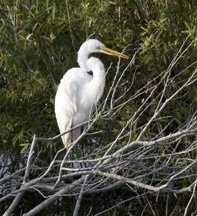 A little further down the trail a White Egret sat in a precarious location. I watched as both a Blue Heron and a Green Backed Heron protected their territory as they shouted obscenities at the egret. He finally had enough and flew away. 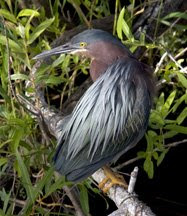 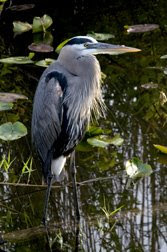 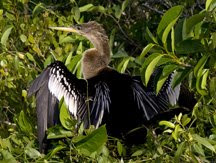 Several Anhingas had their wings spread trying to dry them in the morning fog. 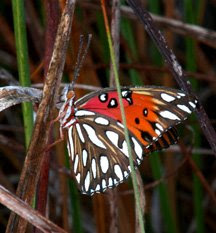 As I made my way around the trail I came across this butterfly. It’s wings were wet with dew so it was having a hard time trying to fly. Did you know that butterflys, bees and houseflys have chemoreceptors (taste receptors) on their feet? Before a butterfly lays their eggs on a plant, she will walk on the leaves to make sure they are edible for the hatchlings. 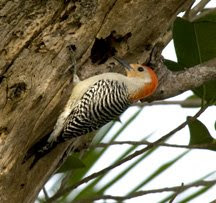 As I continued down the trail I heard the “rat-a-tat-tat” of a woodpecker. I looked all around and then looked up. There it was right over the top of me! What a great photographic opportunity! I took picture after picture…his head was moving so fast it was hard to know if I got any of them without a blur! It was a Redbellied Woodpecker creating a hole for a nest. I had so much fun watching the chips fly out of that hole! 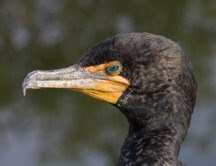 And then I came across my wonderful prehistoric Double Crested Cormorants and their emerald eyes…mmmm, sounds like a good song! 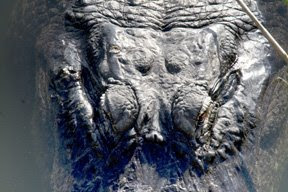 As I walked along it occurred to me that I hadn’t include one alligator in my blog! There are certainly a lot of them in the Everglades, but because I live with them they have become a natural part of my life and aren’t that unique to me anymore…but I’m sure they may be to you, so heres a picture of one really big gator on Anhinga Trail!

As I walked down the trail I overheard a woman say to her husband, “Oh look at all these marvelous creatures! THANK YOU GOD!” … and I thought, yes we should all be thankful that our world is such an incredible place, and in my mind I thanked her for reminding me to thank God… 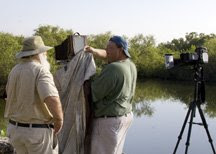 I finally made my way back to Clyde and found him showing his camera to a fellow photographer. 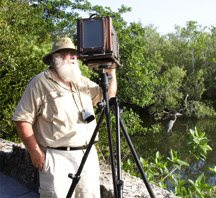 The Blue Heron had returned to his “spot” and was standing there in a nice position for all of the photographers…however, Clyde was the only photographer with a large format camera!
Clyde managed to get several shots…another successful day! 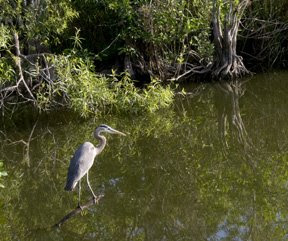 One thought on “Another day on Anhinga Trail”