Our trip to the Everglades National Park took a slight detour to the archaeological site of Long Key. Tim Harrington, of the Archaeological and Historical Conservancy, contacted Clyde and requested that he take a photograph of the site for a mural in the new educational center. They needed the final image to be 10 feet by 27 feet!

Long Key is one of seven “islands” known as Sam Jones’ Seven Islands. Long Key is the largest island and consists of a wilderness composed of 157 acres of oak hammocks and restored wetlands that was, as recently as 100 years ago, part of the Everglades. Records of human settlement on Long Key date back to at least 1000BC with the Tequesta Indians. During the 19th century, the string of islands west of Fort Lauderdale 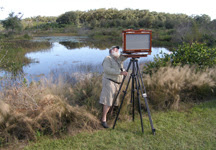 became some of the first permanent settlement sites for the Seminole Indians. Because of its high elevation, remote inland location, isolation by Everglades marshes and the rich hammock soils, Long Key became an important and secure refuge for the Seminoles during the Second Seminole War from 1835-1842.

After the Seminole wars, and the drainage projects of the early 1900’s along with the settler movement, the area was permanently altered. The the traditional Seminole lifestyle could no longer function and the Seminoles moved further west into the Everglades. The islands were settled by farmers. Today Long Key is surrounded by homes in the community of Davie. Fortunately the site was preserved and is now being used as an educational opportunity to explain the history of Florida; the Tequesta Indians, the Seminoles and the Everglades.

For us, it also explains the once great expanse of the flow of water that was the Everglades, which flowed south from Lake Okeechobee, eastward to the Atlantic and south to Florida Bay. Today when we see the homes of Palm Beach County, Broward County and Dade County we forget that the majority of that land really belongs to the Everglades.

When Tim asked Clyde to photograph the area for this project we were both excited about it. I love history, and to be a part of helping the people of Florida understand their history and how both the Everglades and the Seminoles have played a part in creating our state is a thrill to me. For Clyde, an opportunity to create a REALLY BIG photograph is an opportunity that he couldn’t resist!

It took three photo trips to the site before Clyde captured

the image he wanted for the project. He began with his 8×10, thinking that by utilizing the computer he could sharpen the image enough for it to enlarge to 10×27 feet. However, after developing the film and scanning it into the computer, Clyde realized the quality just wasn’t there to enlarge the image to 10×27 feet. He returned a second time with his 12×20″ view camera and tried again.

His 12×20″ camera is like carrying around a television! It is heavy and awkward. It took Tim and I to help Clyde with the camera.

After taking a few images at ground level, Clyde decided he wanted more height. Tim and I helped him get the camera and tripod up onto the top of the van for a better view.

The view was great, but the clouds were wimpy. We spent the afternoon waiting for the clouds that never came. Clyde took some pictures just in case he didn’t have time to return, but wasn’t satisfied with them.

We returned for the third time and once again put the 12×20 camera up onto the roof of the van. This time we were blessed with clouds and Clyde came away with some good photos of the scene.

He had the film processed at Dalmation Labs in North Carolina, then scanned the negative and began working with it in the computer. When it was the way he wanted the image he began printing it out…which took a VERY long time. It took 20 hours of one continuous run to print the image. He printed it in eight different sections. Needless to say, staying up all night might be what a college kid can do, but at the age of 65 it really wore out Clyde….ahhh youth….

He drove the print over to Long Key where they proceeded to install it. 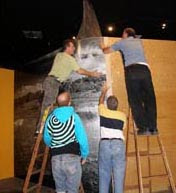 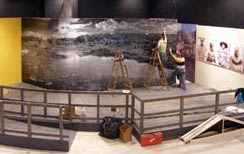 They will be having a public opening when the center is completed. We will announce it when they let us know.

For more information about the Archaeological and Historical Conservancy check out this website: www.flarchaeology.org

One thought on “Almost on our way…”